Together with the ISMM team at IRCAM, we organised a symposium on New Notations in September 2016. The focus was on new notational practices in the context of recent developments in new instruments and digital media. We programmed a day that would enable critical study of the changes in notational strategies brought forward with new music technologies, where graphics, animation, and algorithmic techniques offer extended compositional possibilities. Twelve international practitioners and researchers were invited to address key topics of prescriptive writing of sound for musical performance: 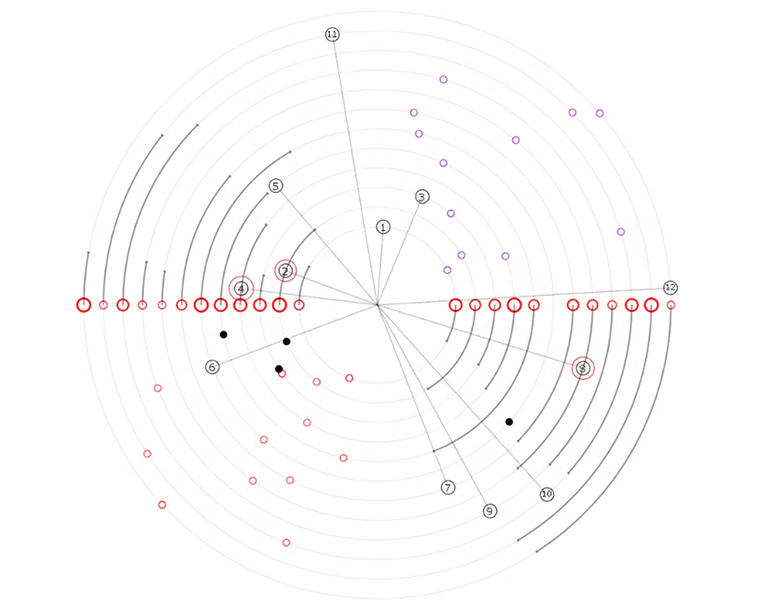 The symposium ran over two days. We started the first day with thirteen short presentations by key practitioners in the field. The aim was to establish a context for further discussions in the afternoon and during workshops the following day. Jonathan Impett’s talk on “Notation as technology”, was a brilliant introduction to the symposium, framing notation as a technology in evolution, discussing hegemonic notation and how notation is becoming porous with other technologies. Sally Jane Norman’s talk “New Notations and Embodied Experience”, raised issues of how we notate human gestures, tracing technologies of recording and the notation of human action. She brought up the importance of being able to read machine readings of human gestures, a question of interfacing and representation. Enrique Tomás’ “Towards Non-linguistic Writing for Music: A Performative Approach” stated that we have become prisoners of representation and that we should “activate the body first, and let the mind observe the result”, pointing to performative materialities in his work on tangible scores. Ryan Ross Smith’s talk “The Trappings of Choice: Mediating the Democratization of Participation through Control” presented a history of animated notation, culminating in his own excellent work in that area. Franziska Schroeder’s talk “The absence of notation - exploring a haptic aurality” explored the relationship between notation and improvisation, and how non-notated musical practice can establish stronger bonds between the musicians on stage. Frédéric Bevilacqua’s “Questions on notations for interactive systems” presentation demonstrated his work on modular music objects that are notational in their nature: they prescribe actions via their affordances.

In the afternoon, after a performance session and lunch break, Pavlos Antoniadis presented his talk “Old notation, new interface: embodied navigation of complex piano notation with the GesTCom,” and explained that he sees notation as an interface. He demonstrated a model of embodied interaction with notation, called GesTCom, which enables the performer to learn musical scores via secondary gestural notation, or multilayered tablature. Dominique Fober’s talk “How technology affects the music score” raised the question of how a musical language evolves and the role of technology in such developments. Dominique is the author of InScore, which he also demonstrated. Claudia Molitor gave a beautiful presentation, “A visual moment,” which combined a talk and a video piece, exploring notation as a mulilayered architectural space, where the score becomes both a ‘script’ to be interpreted as well as a conceptual space. Einar Torfi Einarsson discussed the connective and communicative role of the musical score in his talk “Notation’s struggle to the surface (or, towards concrete notation)”. Einar presented his ideas of found activities, resonating the 20th century found objects. The virtuoso cellist Frances-Marie Uitti’s talk “Signs and Symbols for a New Music” revealed an experienced performer’s perspective on why new instruments require new notational practices. My own (Thor Magnusson) contribution, “On Notating Algorithmic Machines,” focused on how live coding has become one of the key methods in real-time musical notation, where we can write code for equally for machines and humans. Finally, Thierry Coduys’s talk “Notating with IanniX - Score in space and time” gave a good overview of the impressive IanniX non-linear programmable graphical sequencer for digital art, a “6D representation of notation”, in his own words.

Before venturing out into the Parisian night for dinner and drinks, we concluded the day with performances and an open discussion about the pieces we heard, referencing the talks as well. 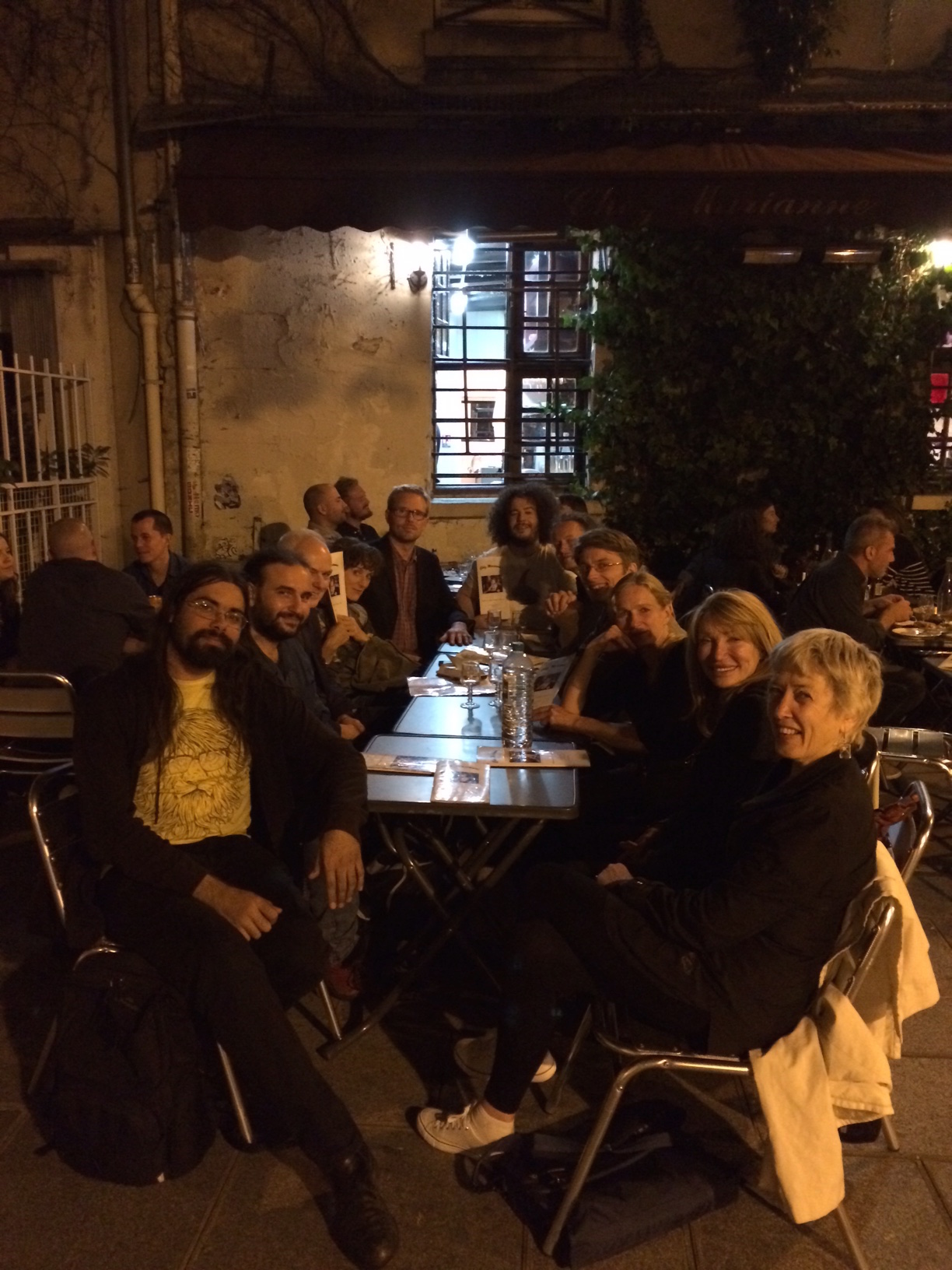 The mondaines who could not conceive of going to bed after the late dinner.

The second day began with a discussion about the talks of the previous day. The notion that notation is some kind of universal language or a transparent layer that communicates music beyond cultural contexts of bespoke practices was called into question. The fact that common Western notation has never been such a universal and prescriptive language, clearly renders new approaches to notation, including graphical notation, secondary notation, extended notation, verbal notation, etc. impossible to standardise or become a subject of a general acceptance. For that reason, we agreed that it is impossible to create any minimal standards or platforms of new symbolic notation, never mind guide books or manuals. Frances Marie-Uitti gave us an insight into her work in performing pieces with new notations, explaining some of the difficulties of interpretation involved when having to learn a new symbolic language at the same time as a new piece. There is typically a reason for why composers decide to adopt new notational practices – this type of notation conveys something that traditional notation cannot signify – and the learning process is therefore often longer and more difficult for the interpreter. We also discussed that although the score has a tendency to become an aesthetic object on its own – and it often is – ultimately it is really what the performer decides to do with it that matters: what music it engenders.

After the discussion we had four workshops: animated notation with Ryan Ross Smith; concatenative synthesis with Diemo Schwarz; Netem workshop with Alice Eldridge and Chris Kiefer; IanniX workshop by Thierry Coduys and Guillaume Jacquemin; and finally a workshop in CoSiMa with Norbert Schnell. The workshop leaders managed to brilliantly add meat onto the theoretical bones that we had been operating with in the previous sessions.

The presentations and some of the performances were recorded on video. Many thanks to IRCAM for sharing them with us and to Éric de Gélis for the excellent editing. The videos can also be found on IRCAM’s video channel.

Thor Magnusson: Introduction to the Symposium

Enrique Tomás: Towards Non-linguistic Writing for Music: A Performative Approach

Ryan Ross Smith: The Trappings of Choice: Mediating the Democratization of Participation through Control

Franziska Schroeder: The absence of notation - exploring a haptic aurality

Einar Torfi Einarsson: Notation’s struggle to the surface (or, towards concrete notation)

Frances-Marie Uitti: Signs and Symbols for a New Music

Thierry Coduys: Notating with IanniX - Score in space and time